33 years of providing
Sound Healing, Color Therapy and Chi Movement for the Soul!
1988-2021 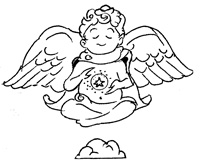 We give thanks to the Divine Source of all Light, our Creator,
as well as all the Beings of Light, Angels, Guides of the Academy,
our Guides and the Devas of Nature who watch over us on our Way of the Soul to the Light.

We would also like to honor the work of the Masters who have walked this Path before ~
and whose wisdom have inspired us on our Way of the Soul to the Light.

Initiatique Teachings of the Light

The Zwawoua an African tribe that played in the streets of Oran.

Baden Powell who brought a noble and natural sound through his style and compositions.

Sensei M. Nakazano who brought Kototama, The Science of Pure Sound, to the west.

Joel Sternheimer, physicist, who discovered the "music of the elementary particles and molecules".

Fabien Maman, who took 5 sounds and created 12…. and who continues the work of the Masters...

Masters of Color and Essences

Alice Bailey, who received the 7 Rays.

Vicky Wall, who captured the essence of the 7 Rays in Aura Soma.

Patricia Janusz, who received the Rainbow Etheric Essences from Vicky Wall, and who transmitted her knowledge to Faery Shaman Terres Unsoeld...

Dr. Patrick Camus, Research in Color therapy and creator of the Color Glasses.

Terres Unsoeld, who created the Faery Essences®... and who continues the work of the Masters...

O Sensei Ueshiba, an amazing warrior of wisdom, who created Aiki-Do, a non-violent form of martial art to redirect energy, in a peaceful way, with grace and efficiency. Ueshiba brought this martial art to the highest and finest degree possible, as a link between the very tangible and the invisible world.

Sensei Nakazono, who made a synthesis of Aiki-do and Kototama, carrying it forward to the West, and who initiated Fabien Maman into the Sacred teachings of INOCHI.

Master Pang Ming who created Zhineng Qi Gong and initiated Fabien Maman to pass it on.

Eve Green, who transmitted to Terres Unsoeld the gifts of dance.

Jim Hancock, who initiated Terres Unsoeld into the art of chi movement and qi gong.

Fabien Maman who created Tao Yin Fa Series I-V, Qi Gong of the Light… and who continues the work of the Masters...

Willliam Frances Unsoeld, a mountaineer, who opened Terres Unsoeld to the Sacred Values of Wilderness.

Stanley Bishoprick, a mariner and adventurer, who taught Terres Unsoeld to look Beyond Infinity at the stars.

Nicole Bartolucci, the Druidic Priestress who brought Fabien Maman the 8 Master Stars of Tama-Do; and who initiated Terres Unsoeld into the ethereal realm of the Elemental Devas of Nature and Master Trees and how to contact them through sound and movement.

The Magical Teachings of the Druid Plants, which came to Terres Unsoeld in a dream and with the help of Susannah.

Terres Unsoeld, who created Shamanism of the Light, upon which Tama-Do is now based; as well as the Shamanique Journeys of the Light in the Heart of Nature... and who continues the work of the Masters...

Sensei Nakazono, who initiated Fabien Maman into the Sacred teachings of Japanese acupuncture.

Dr. Rene Gandolfi, leader of the School of Pragmatic Anthroposophy.

Terres Unsoeld, who uses her own healing powers, in service through Tama-Do Academy... and who continues the work of the Masters...

We must always remember from where we come - to know where we are going...